BEIJING, Sept. 11 (Xinhua) -- Chinese President Xi Jinping on Friday stressed continuing to advance the development of science and technology to a deeper and broader level.

Xi, also general secretary of the Communist Party of China (CPC) Central Committee and chairman of the Central Military Commission, made the comments at a symposium attended by scientists in Beijing.

Xi said the scientific and technological development must target the global science frontiers, serve the main economic battlefield, strive to fulfill the significant needs of the country and benefit people's lives and health. 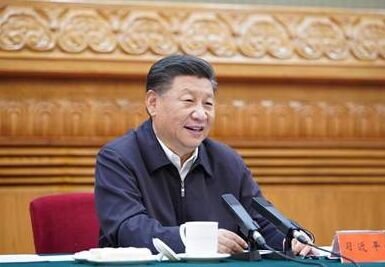 Xi chaired the symposium to solicit opinions on China's scientific and technological development for the 14th Five-Year Plan (2021-2025).

He said Chinese scientists and scientific professionals have the confidence, determination and capability to scale the heights of science.

Xi exchanged ideas with each of the scientists who spoke at the symposium.

Since the 18th CPC National Congress, China has made historic achievements and transformations in science and technology, Xi said, adding that China has seen major innovations emerge in large numbers and the country is now leading or co-leading the world in some frontier areas.

China's scientific professionals have made major contributions to the fight against COVID-19 with their research in treating patients, developing vaccines, containing the epidemic, and other important areas, Xi said.

Xi called for persistence in strengthening basic research by providing more resources and policies to create a favorable atmosphere for basic research.

More efforts were also urged to improve education in basic subjects such as mathematics, physics, chemistry and biology, and cultivate students' innovation spirit and capability.

Xi spoke of the need to energize sci-tech innovation through reform and unleash the great potential of innovation by deepening the reform of the sci-tech system.

He also called for strengthened international sci-tech cooperation and pledged more efforts to integrate into the global innovation network and to enhance China's sci-tech innovation capability through open cooperation.

Xi called on scientists to integrate their scientific pursuits into the great cause of building a modern socialist China.

He challenged scientists to propose new theories, open up new fields and explore new paths, as well as to produce more high-level and original achievements.

Xi also said interest in science should be guided and nurtured from a young age.

Party committees, governments and officials at all levels should respect knowledge, talent and creation, follow the law of scientific development, and push for sci-tech innovations and their transformation into productive forces, Xi said.